The fruit from a poisoned tree – use of unlawfully obtained evidence 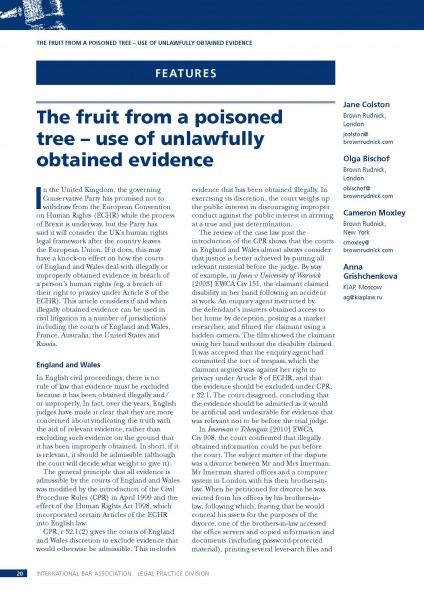 In the United Kingdom, the governing Conservative Party has promised not to withdraw from the European Convention on Human Rights (ECHR) while the process of Brexit is underway, but the Party has said it will consider the UK’s human rights legal framework after the country leaves the European Union. If it does, this may have a knock-on effect on how the courts of England and Wales deal with illegally or improperly obtained evidence in breach of a person’s human rights (eg, a breach of their right to privacy under Article 8 of the ECHR). This article considers if and when illegally obtained evidence can be used in civil litigation in a number of jurisdictions including the courts of England and Wales, France, Australia, the United States and Russia.

In English civil proceedings, there is no rule of law that evidence must be excluded because it has been obtained illegally and/or improperly. In fact, over the years, English judges have made it clear that they are more concerned about vindicating the truth with the aid of relevant evidence, rather than excluding such evidence on the ground that it has been improperly obtained. In short, if it is relevant, it should be admissible (although the court will decide what weight to give it).

The general principle that all evidence is admissible by the courts of England and Wales was modified by the introduction of the Civil Procedure Rules (CPR) in April 1999 and the effect of the Human Rights Act 1998, which incorporated certain Articles of the ECHR into English law.

CPR r 32.1(2) gives the courts of England and Wales discretion to exclude evidence that would otherwise be admissible. This includes evidence that has been obtained illegally. In exercising its discretion, the court weighs up the public interest in discouraging improper conduct against the public interest in arriving at a true and just determination.

The review of the case law post the introduction of the CPR shows that the courts in England and Wales almost always consider that justice is better achieved by putting all relevant material before the judge. By way of example, in Jones v University of Warwick [2003] EWCA Civ 151, the claimant claimed disability in her hand following an accident at work. An enquiry agent instructed by the defendant’s insurers obtained access to her home by deception, posing as a market researcher, and filmed the claimant using a hidden camera. The film showed the claimant using her hand without the disability claimed. It was accepted that the enquiry agent had committed the tort of trespass, which the claimant argued was against her right to privacy under Article 8 of ECHR, and that the evidence should be excluded under CPR, r 32.1. The court disagreed, concluding that the evidence should be admitted as it would be artificial and undesirable for evidence that was relevant not to be before the trial judge.

In Imerman v Tchenguiz [2010] EWCA Civ 908 the court confirmed that illegally obtained information could be put before the court. The subject matter of the dispute was a divorce between Mr and Mrs Imerman. Mr Imerman shared offices and a computer system in London with his then brothers-in-law. When he petitioned for divorce he was evicted from his offices by his brothers-in-law, following which, fearing that he would conceal his assets for the purposes of the divorce, one of the brothers-in-law accessed the office servers and copied information and documents (including password-protected material), printing several lever-arch files and then passing them to the solicitors acting for his sister in the divorce proceedings.

In its judgment, the Court of Appeal expressed its dislike for parties taking the law into their own hands and illegally helping themselves to information or documents. However, the court also reiterated that evidence improperly obtained can still be used in court, acknowledging the fact that common law does not usually concern itself with how evidence is obtained when considering admissibility. The Court of Appeal endorsed the principle that the court will exercise its discretion to exclude admissible evidence obtained unlawfully if it is in the interests of justice to do so in accordance with the significance or weight of the evidence in question, as well as with regard to the gravity of the law-breaking concerned, but accepted that the necessary balancing exercise is often very difficult.

A case where the court excluded evidence was ITC Film Distributors Limited v Video Exchange Limited [1982] Ch. 431. In this case a number of boxes containing video cassettes and files were left in a Court after a hearing and one of the parties obtained them “by trick”. The Judge excluded the evidence, concluding that the interests of the proper administration of justice required him to do so as the danger to the court system if one party was able to take possession of documents belonging to the other side within the precincts of the court would outweigh the potential injustice to the parties in any particular case.

Litigators before the courts of England & Wales should bear in mind the following:

In the US illegally obtained evidence, in the main, is excluded in criminal proceedings. Known in US jurisprudence as the “exclusionary rule,” it emanates from the Fourth Amendment to the US Constitution which prohibits “unreasonable searches and seizures”. In 1914, it was first held to bar the admission in a federal criminal action of evidence obtained illegally by federal agents (Weeks v US, 232 US. 383 (1914)). The exclusionary rule applies not only to the original evidence illegally obtained but also to copies and knowledge gleaned therefrom (Silverthorne Lumber Co., Inc. v US, 251 US 385, 392 (1920): “The essence of a provision forbidding the acquisition of evidence in a certain way is that not merely evidence so acquired shall not be used before the Court but that it shall not be used at all”; See also, for example, Utah v Strieff, 136 SCt 2056, 2061 (2016): “Under the Court’s precedents, the exclusionary rule encompasses both the ‘primary evidence obtained as a direct result of an illegal search or seizure’ and ‘evidence later discovered and found to be derivative of an illegality,’ the so-called ‘fruit of the poisonous tree”.

Faced with the question of whether the exclusionary rule applied not only to the federal government but also to the states, in 1949 the US Supreme Court initially answered that while the Fourth Amendment did apply to the states through the application of the Fourteenth Amendment’s “due process clause,” that application did not require the states to abide by the exclusionary rule (Wolf v Colorado, 338 US 25, 33 (1949): “We hold that in a prosecution in a state court for a state crime the Fourteenth Amendment does not forbid the admission of evidence obtained by an unreasonable search and seizure”). Just 12 years later, however, the Supreme Court reversed its decision in Wolf and definitively held in Mapp v Ohio, 367 US 643 (1961) that the exclusionary rule did, in fact, apply to the states. The Court reasoned that because “the Fourth Amendment’s right of privacy has been declared enforceable against the states through the due process clause of the Fourteenth Amendment, it is enforceable against them by the same sanction of exclusion as is used against the Federal Government”.

Thus, the exclusionary rule is a creature of US Constitutional law emanating from the Fourth and Fourteenth Amendments. It is not absolute, however, and given “the significant costs” of the rule in excluding otherwise relevant evidence, the rule is “applicable only where its deterrence benefits outweigh its substantial social costs.” (Strieff, 136 SCt at 2061).

Exceptions to the exclusionary rule include (1) “the independent source doctrine” which “allows trial courts to admit evidence obtained in an unlawful search if officers independently acquired it from a separate, independent source”; (2) “the inevitable discovery doctrine” which “allows for the admission of evidence that would have been discovered even without the unconstitutional source”; and (3) “the attenuation doctrine” which allows for the admission of evidence “when the connection between unconstitutional police conduct and the evidence is remote or has been interrupted by some intervening circumstance.”

French civil courts do not permit the use of evidence obtained via illicit means. "Having regard to Article 9 of the Code of Civil Procedure, together with Article 6§1 of the European Convention on Human Rights and the principle of fairness/loyalty in the production of evidence; […] the recording of a telephone communication made unbeknownst to the author of the statements constitute a unfair method rendering inadmissible its production as evidence" (see Assemblée plénière, Cour de cassation, 7 January 2011, No 09-14.316 0914.667).

By way of exception, evidence obtained in breach of the right to privacy can be admitted by the French civil courts as evidence if they are essential for exercising the right and that the breach is proportionate to the objective pursued (see Cour de cassation, Civil Chamber, 25 February 2016, n°15-12.403).

What directly follows from this approach is that, as long as one can satisfy the court that the evidence has been obtained unlawfully, the court will not consider whether or not that evidence is relevant to the issues in dispute between the parties.

Russian judges typically take a very formal approach and strictly interpret the law. In case number 33-10295/12 the Supreme Court of Republic Bashkortostan upheld the decision of the lower courts and refused to examine phone records of conversations between the claimant and the respondent. The court mentioned that each person is entitled to privacy of his personal communications and this privacy can be circumscribed only with a court order. In the absence of a court order, phone records obtained illegally could not be used as evidence (see appeal ruling of the Supreme Court of Republic Bashkortostan dated as of 06.09.2012 case number 33-10295/12).

Russian lawyers use different creative tactics in order to try nonetheless to introduce sensitive evidence to the court, for example, they initiate criminal proceedings and obtain evidence which later is introduced in civil proceedings.

In the case number 33-КГ15-6 the claimant asked for recovery of a loan; the respondent argued that the money had been received not as a loan but as compensation and introduced video evidence. The Supreme Court of the Russian Federation on appeal found the video admissible stating that as far as the video related to a contractual relationship between the parties it was not personal correspondence protected by the privacy rules (see ruling of the Supreme Court of the Russian Federation dated 14 April 2015 case number 33-КГ15-6). Such approach shows that there are ways to admit sensitive evidence but it is not straightforward.