Tribunal Seated in London Awarding Costs of Ancillary Litigation in Warsaw: Another Exception to the General Rule? 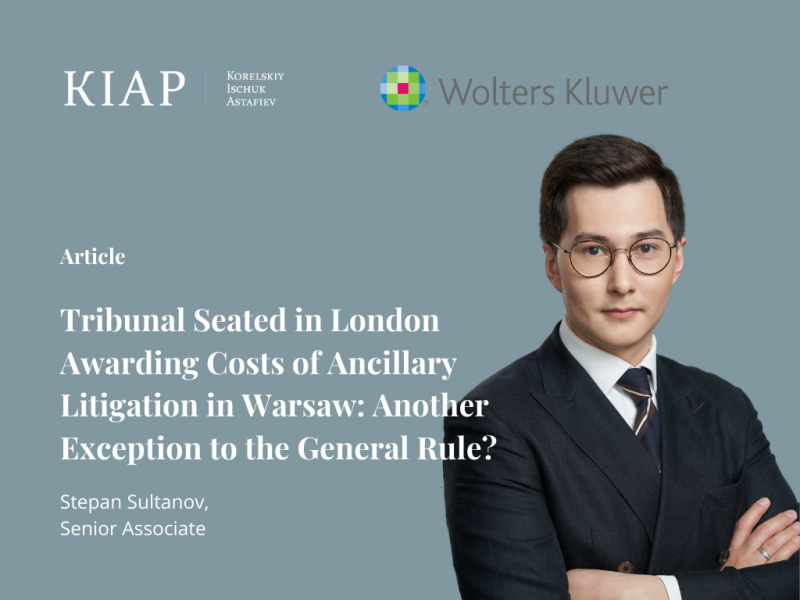 However, the question may arise as to how often the lex fori of the court granting interim measures urges a party to ask an arbitral tribunal to award costs of ancillary litigation proceedings in the arbitration. For instance, according to Finnish law, the costs of proceedings regarding interim measures have to be determined and then allocated between the parties only in connection with the decision on the merits of the dispute, i.e., in a final award rendered by the arbitral tribunal. An arbitral award rendered in 2020 under the 2014 LCIA Rules sheds light on the matter when Polish courts order interim measures in support of international arbitration seated in London.

Background to the Case

In said matter, a dispute arose out of two contracts for the sale of motor diesel fuel. Both contracts were governed by English law. The Swiss seller delivered the full amount of fuel under the first contract and a part of the agreed amount under the second contract. The Polish buyer accepted the delivered goods. At the same time, the buyer failed to pay for the last four shipments under the first contract and for all shipments under the second contract. As a result, the seller suspended further deliveries and submitted two requests for arbitration under the LCIA Rules and demanded payment for the delivered goods and the contractual interest.

Before submitting its requests, the seller applied for interim measures in support of these arbitral proceedings before the Polish state courts, where the buyer was based. In short, the seller applied for two separate interim measures in two separate proceedings: an interim injunction in the form of an attachment to the buyer’s bank accounts and other receivables, and an application for an interim injunction for a judicial mortgage. The seller prevailed in both court proceedings.

The buyer appealed both interim measures unsuccessfully. In one of the cases, the appellate court adjudicated the costs of the appeal proceedings in favor of the seller.

The seller also prevailed on the merits of the arbitration proceedings. The arbitrators noted that, in contrast to the substantive issues, the issue of costs was hotly disputed and was subject to no less than seven written submissions.

Even before the final award was rendered, the buyer had been ordered to pay all of the seller’s costs occasioned by two of the buyer’s adjournment applications. As for the final award, the seller had been pursuing a goal of allocating all costs of arbitration and interim measures to the buyer. As for the costs which the appellate court partially adjudicated, the seller argued that the court incorrectly did so. Still, the seller reduced its claims on the amount of the previously adjudicated costs.

A party-appointed expert confirmed the seller’s position. Under Polish civil procedural law, when deciding on interim measures, a court does not decide on costs of those proceedings. The relative costs are awarded in the judgment deciding on the merits of the case, i.e., in the final judgment. In the case at hand, the arbitrators found a similarity with an English rule, according to which the costs follow the event. Consequently, it is only possible to know which party won (and should thus recover its costs) once the final decision on the merits is reached. In the arbitral proceedings, the final decision on the merits is reached by the arbitral tribunal. Thus, the arbitral tribunal is the only forum that can decide on the costs incurred by the parties in the course of the interlocutory proceedings before the state courts for interim measures.

The expert concluded that if the arbitral tribunal does not decide on the costs of interlocutory proceedings, Polish state courts would decline to decide on those costs at the request of the parties. The Polish courts would be only entitled to award interim measure costs incurred after the final award had been rendered.

The buyer tried to contest the seller’s position. According to the buyer, no clear-cut answer exists in Polish jurisprudence as to whether it is the Polish courts or an arbitral tribunal that can rule on the allocation of costs of interim measures in support of international arbitration. To support such allegation, the buyer referred to cases where Polish courts awarded the costs of interim measures ordered in support of international arbitration.

Despite this, the arbitral tribunal agreed with the seller and stated as follows (direct quotation from the award, with only the names of the parties anonymized):

[U]nless we make an award in respect of those costs, following an assessment of their reasonableness, the Claimant will be unable to recover such costs. This would expose any claimant in [Claimant’s] position to a choice of either pursuing interim measures for the preservation of assets through the local courts, knowing that it will not recover its costs of doing so (albeit this would be a direct result of its previous choice to contract with the Respondent), or waiting until the constitution of the Tribunal to make its application for interim measures thus risking that in the meantime the Respondent will dissipate its assets rendering any further arbitral award effectively unenforceable and useless.

Consequently, the arbitral tribunal ruled that the buyer must pay all costs. In doing so, the tribunal slightly reduced the costs of interim measures proceedings in Poland taking into account the amount of legal costs of arbitration itself.

After the final award was rendered, the seller initiated proceedings in Poland in order to enforce the award. In November 2021, the Warsaw Court of Appeal recognized and enforced this award in its entirety.

The rationale of the Finish and Polish approaches is similar. It follows that if the lex fori of the court granting interim measures allows for allocating relevant costs only by a final judgment on the merits, then the arbitral tribunal may award such costs as costs of arbitration in support of which interim measures were granted. Otherwise, a party asking for interim measures will be unable to recover such costs. The case discussed in this blog post constitutes a notable exception to the general rule, under which costs of litigation proceedings ancillary to arbitration are not costs to be reimbursed in arbitration proceedings.