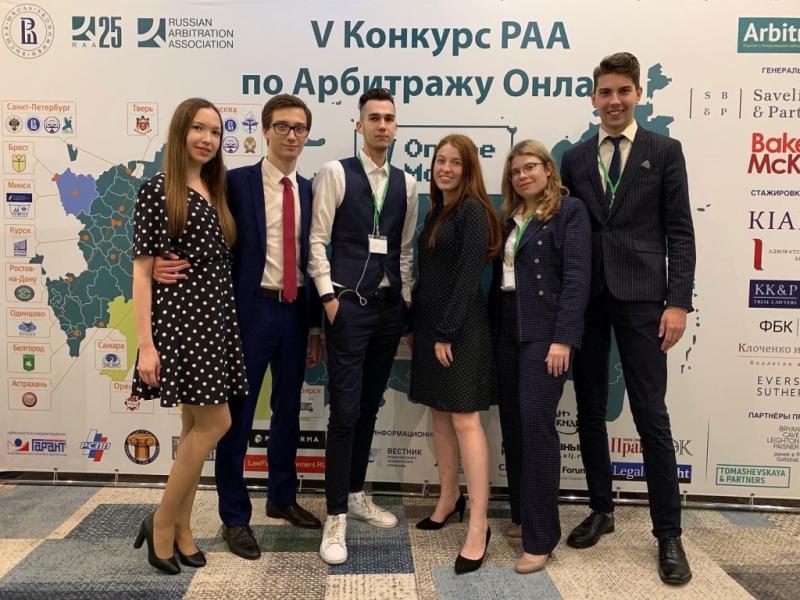 On August 29-30, 2020, the results of the V RAA Competition On Online Arbitration (Online Moot) were summed up - an annual student Moot Court Competition in the format of a mock-trial (moot-court), organized by the Arbitration Association (RAA) with the support of the Faculty of Law of the Higher School of Economics National Research University.

Traditionally, the Competition is held in two stages. As part of the first stage, which runs from March to June, teams send statements of claim and responses to statements of claim to the organizing committee, after which online rounds are held via video conferencing. At the second stage, participants who have passed the selection to the next stage based on the results of online rounds and assessments for procedural documents (claim and response to the claim), participate in the Conference of the Arbitration Association Competition and oral hearings at the Higher School of Economics. The final stage is usually held at the end of August, and this year was no exception - the final rounds of the fifth Contest were held on the last summer weekend: on August 29 and 30, 2020.

KIAP, Attorneys at Law, traditionally acted as partner of the event and, following the results of the final rounds, provided an internship to the “Best Speaker” of the Competition. Also, the lawyers of KIAP took an active part in the competition. Thus, the Head of Commercial Practice, attorney at law Julia Kirpikova, senior associates of the ICA practice Natalia Kisliakova and Stepan Sultanov, associate of the Intellectual Property practice Anastasia Skovpen and associate Anton Kaminskiy acted as arbitrators in the online and offline rounds. Senior Associate Natalia Kisliakova spoke at the conference timed to coincide with the Competition with the topic “Effective Research Skills”.

This year, the winners' podium of the Competition in several nominations was taken by teams coached by colleagues from the practice of International Commercial Arbitration:


KIAP, Attorneys at Law, congratulates the winners and participants of the Competition and wishes them further professional success.

In 2020, the Competition was held for the fifth time. Dozens of teams and referees from all over Russia and the CIS countries take part in the event every year. In 2019, 67 teams from more than 40 educational institutions became participants in the Competition.