KIAP is one of the leaders of the legal market in the area of litigation according to Pravo.Ru 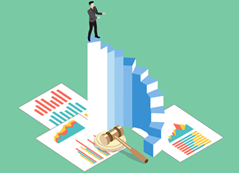 Third year in a row the number of registered claims by the arbitration courts steadily grows and their total amount increases. Herewith the companies are ready to sue for the less sums, than the last year. Although the claims become cheaper, the consultants perfect the litigation practice and the competition on this market grows. “Pravo.Ru” presented the survey of the litigation market in Russia, in which the most successful law firms in the area of litigation are included.

KIAP entered into the ten leading federal law firms on the Russian market according to the total amount of claims for all cases.

On the federal level the companies with 30 and more cases were divided into four groups – KIAP with median sum of claim in the amount of 11,9 mln rubles entered the third group.

The federal companies were also divided by the average amount of the claim – KIAP is on the 11th place.

“Pravo.Ru” analytics have analyzed 10 404 final rulings of Russian arbitration courts, which were rendered within the period from January 1 to December 31, 2018. Only participation of the company on the side of plaintiff or defendant was counted, the claims on the recovery of legal costs and processes for contesting the denial of reconsideration of the case on again opened circumstances etc. were not counted. In case within the framework of one dispute the counterclaim was filed, two decisions and sums of two claims were counted. The exception was made for the counterclaims on for invalidation of transactions.