Welcome to the dollhouse 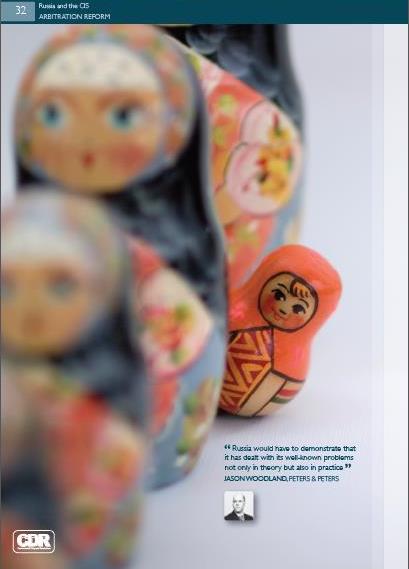 Source: CDR | PDF статьи
There are few members of the international community currently less popular than Russia. The opprobrium directed at Vladimir Putin for annexing Crimea earlier this year was redoubled in July with the downing of flight MH17 over Ukraine, an attack believed to have been carried out by pro-Russia separatists. To compound matters, a heavyweight arbitral tribunal in The Hague a matter of weeks after ordered Moscow to pay USD 50 billion to the majority shareholders in defunct Russian oil company Yukos, which it said had been destroyed by the Putin government in a politically-motivated attack that violated international law.

It is against this background that the Russian Ministry of Justice is seeking to convince businesses, home-grown and foreign alike, to bring their disputes for resolution in the world’s largest country. The ministry earlier this year proposed a set of draft laws for the Federal Law and the Code of Civil Procedure, aimed at reforming and amending existing laws to help promote the use of arbitration in Russia. The revisions have attracted criticism from practitioners both inside and outside the country. Although the draft statutes make new promises, they are seen by some legal experts as going too far. Others believe the legislation doesn’t go far enough.

According to a report by the justice ministry, there are between 2,000 and 3,000 arbitral institutions in Russia. More than 80% of the institutions, known colloquially as ‘pocket courts’, are allegedly involved in illegal activity. “The purpose of the reforms is to fight pocket courts affiliated with one of the parties, and other abuses in arbitration in Russia,” says Konstantin Astafiev, the co-founder of Korelskiy Ischuk Astafiev, a Moscow-headquartered law firm.

These pocket courts were created on an ad hoc basis by businesses in order to settle disputes with other, often domestic, parties. Not surprisingly, Russian lawyers see their impartiality – both real and perceived – as a major block to the country’s development as an arbitration-friendly jurisdiction. Under the new reforms, many domestic arbitration centres would be deemed unlawful, and be required to cease operation.

That will be no great loss, says Andrei Yakovlev, a Winston & Strawn partner whose practice specialisms include international arbitration. “There are enough reputable local and international institutions and rules to which parties can submit their disputes if they wish,” he says. “They don’t need to search for an arbitration institution in a small Siberian town to have their dispute resolved. Parties just need to use common sense when they negotiate arbitration clauses.”
“We want to see Russian tribunals more than anything else,” said Vladimir Lisin, the vice-president of the Russian Union of Industrialists and Entrepreneurs, speaking at the St Petersburg International Legal Forum in June 2014. “We aren’t happy about situations where Russian business goes to London, Stockholm or other countries – it isn’t the most sensible option,” added Lisin. “Not everyone can afford it, it isn’t efficient and we’d like the tribunals to be Russian.”

The trend for Russian parties to litigate their disputes anywhere but home shows little sign of slowing. Sweden excepted, they filed more cases at the Stockholm Chamber of Commerce in 2013 than parties from any other jurisdiction, with 7.3% of the institution’s mandates involving one or more Russian businesses. For its part, 3.4% of the case filings London Court of International Arbitration in 2013 were made by a Russian party. (See article on page 24.)

Coupled with the widespread use of London’s commercial courts by Russian businesses of every size and description, the prospect of convincing those parties to settle their disputes at home appears remote. As Yakovlev puts it: “There are long-standing international institutions and arbitration rules in place for disputes. Why experiment with relatively new Russian arbitration institutions if a well tried and tested arbitration process is available outside Russia?”

The draft laws are currently only available in Russian. That alone will not be enough to convince the country’s businesses of their merits. Indeed, in its comments on the draft, the Russian Arbitration Association noted that “the business community in Russia still largely mistrusts arbitration as a form of dispute resolution”. It cited the dependence of arbitration courts on the organisations under which they have been established, the formation of tribunals, the lack of transparency and susceptibility to corruption as being among the main reasons for their caution.

By contrast, national parties account for at least 50% of the caseloads at the SCC, LCIA and AAA-ICDR. “We want arbitration to be a mechanism of dispute resolution that would be trusted by businesses,” said Vladimir Khvalei, the chairman of the Russian Arbitration Association and a partner at Baker & McKenzie in Moscow, at the St Petersburg event.

That may be easier said than done. “Russia would have to demonstrate that it has dealt with its well-known problems not only in theory but also in practice,” says Jason Woodland, a special counsel at London disputes boutique Peters & Peters. “It will also need to demonstrate a consistent approach towards arbitration and develop a track record of cases in order to give clients confidence in choosing Russia as a venue.”

The Kremlin sees all

The reforms are loosely based on the UNCITRAL Model Law – described by Khvalei at the St Petersburg event as the “standard product for emerging jurisdictions”. He added: “Even though the Model Law has been very successful and has been adopted by many countries, it hasn’t made arbitration more popular in those countries – it is not making those countries popular venues of arbitration.” They are focused on the eligibility of arbitration across a range of cases. Other targets include the creation and composition of what the drafts interchangeably refer to as ‘arbitral courts’ and ‘tribunals’, jurisdiction, and the selection and qualifications of arbitrators. Ominously, however, the spectre of court involvement hangs over much of the proposed legislation. “Additional influence on arbitration, particularly through registering and effectively licensing arbitration institutions, may create a body of quasi-judicial, state-licensed dispute resolution bodies,” says Andrey Panov, a senior associate at Norton Rose Fulbright in Moscow.

The drafts stipulate that arbitrators be selected from a list either belonging to the relevant permanent arbitral institution or from a special list drawn up by the Ministry of Justice. All permanent arbitral institutions must be registered as noncommercial organisations and receive authorisation from a special committee consisting of representatives from the government and the legal and business communities. “The idea of licensing arbitration institutions – particularly in international arbitration – sounds very strange. It also may send a wrong message by creating yet another body of statedependent adjudicators,” says Panov.

That proposal was ultimately rejected by the president’s legal office, meaning that the Ministry of Justice has to now amend the relevant parts of the draft legislation. Still, that it was included in the first place doesn’t fill practitioners with confidence. “Although these sorts of changes may have a positive effect on some of the problems in arbitration in Russia, they may make arbitration as a whole more complex and inflexible,” says David Goldberg, a partner at White & Case who splits his time between London and Moscow.

The draft bill was scheduled to reach Russia’s parliament, the Duma, earlier this year; that it did not do so came as a result of the revisions required by the Ministry of Justice’s consultation process. Scheduled to take effect on 1 January 2015, few Russian lawyers believe it will be completed in time, given the significant modifications required.

“Following the comments from the president’s administration on the draft reforms, it seems that the Ministry of Justice will have to carry out an overhaul of the basic concepts underlying the proposed reforms,” says Goldberg. “The state is trying to find the right balance,” adds Varvara Knutova, who leads the dispute resolution practice at Pepeliaev Group in Moscow. “It will be also very helpful if the dialogue between the state and professionals continues, as there is no unique and everlasting solution.”

Institutions including the Russian Union of Industrialists and Entrepreneurs and the Russian Arbitration Association were involved in the consultation process, and continue to offer advice on the law’s implementation. “The debate surrounding the reform, being open and public, was healthy for the industry, and can be seen as a way to promote the use of ADR,” says Ilya Nikiforov, the deputy chairman of the Russian Arbitration Association and founding partner of Egorov Puginsky Afanasiev & partners in Moscow.

Although the drafts indicate that Russia has taken steps to address at least some of its deep-rooted problems with arbitration, only time will tell whether they represent a step forward. “It will take a long time for Russian parties to truly trust that system. It may be that Russian parties therefore continue to refer their disputes outside of Russia for many years to come,” says Yakovlev.

The worst case scenario sees overregulation make arbitration more unappealing than even litigation in the Russian courts. That, in turn, would ensure that the country becomes “even less attractive a venue for the resolution of international disputes” says Panov.