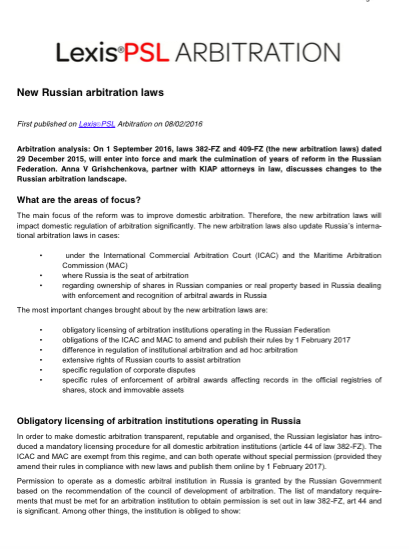 Arbitration analysis: On 1 September 2016, laws 382-FZ and 409-FZ (the new arbitration laws) dated 29 December 2015, will enter into force and mark the culmination of years of reform in the Russian Federation. Anna V Grishchenkova, partner with KIAP attorneys in law, discusses changes to the Russian arbitration landscape.

What are the areas of focus?

The most important changes brought about by the new arbitration laws are:

In order to make domestic arbitration transparent, reputable and organised, the Russian legislator has introduced a mandatory licensing procedure for all domestic arbitration institutions (article 44 of law 382-FZ). The ICAC and MAC are exempt from this regime, and can both operate without special permission (provided they amend their rules in compliance with new laws and publish them online by 1 February 2017).

Permission to operate as a domestic arbitral institution in Russia is granted by the Russian Government based on the recommendation of the council of development of arbitration. The list of mandatory requirements that must be met for an arbitration institution to obtain permission is set out in law 382-FZ, art 44 and is significant. Among other things, the institution is obliged to show:

Licensing is obligatory both for domestic and foreign institutions. However, it is far less onerous for a foreign arbitral institution to obtain the permission required to operate in Russia as the only prerequisite is a widely recognised international reputation. No other requirements, including requirements to list arbitrators, need to be present (law 382-FZ, art 44, para 8).

Under the new arbitration laws, Russian courts are entitled to terminate the activity of both foreign and domestic arbitral institutions in Russia in cases where numerous serious violations of the law result in damage to parties or third parties and requests to cease violations have not been acted upon (law 382-FZ, art 48). The procedure of termination so far is not fully specified—with regard to foreign institutions, the court will presumably have a right to recall the previously granted permission to operate.

Difference in regulation of institutional arbitration and ad hoc arbitration

Historically ad hoc awards have enjoyed a lesser degree of confidence in Russian courts than awards made under institutional rules. Lawyers have to go to greater lengths to persuade Russian judges to enforce ad hoc awards. Russian legislators have also consistently stated that some ad hoc awards in Russia were used in hostile takeovers or transfer of property. This attitude has been formalised in the new arbitration laws.

One of the biggest differences in regulation of ad hoc and institutional arbitration under the new arbitration laws is that Russian courts will not assist ad hoc tribunals in obtaining evidence.

Though the power of Russian courts to assist arbitrations existed prior to the new arbitration law, it was more declarative than under the forthcoming regime. In order to make the court’s powers more concrete and effective, the Russian legislator has amended procedural codes and specified how parties or the tribunal may apply for assistance and the time-frames for providing such assistance [law 409-FZ]. These amendments may result in real changes in this sphere.

Russian courts can assist arbitration by:

The corporate disputes that can be referred to arbitration are:

The only exception is made for disputes regarding ownership of shares and stock and disputes with the registrar of shares, ie arbitral institutions are not obliged to have special rules to handle such disputes.

According to the new arbitration laws, such institutions like the International Court of Arbitration, the London Court of International Arbitration and so on will need to get permission to act in Russia and will be required to amend their rules accordingly to deal with corporate disputes. Whether or not they will do so is another question.

Specific rules of enforcement of arbitral awards affecting records in the official registries of shares, stock and immovable assets

To stop the existing practice of transferring rights for immovable property and shares through arbitral awards that are subject to challenge, the new arbitration laws introduce additional mechanisms of control.

The possibility of using an arbitral award as a ground for making records in special registries regarding change of ownership is prohibited under the legislation. Now, to make changes in public registries (such as registry of legal entities or registry of real property or registry of shares) parties should apply for enforcement of an arbitral award and to obtain a list of execution. Only a list of execution can be deemed as a proper ground for changes in respective registries. This makes the procedure of registration longer, but ultimately more reliable (law 382-FZ, art 43 and law 409-FZ).

Other changes in arbitration law

Many aspects of arbitration, such as the language of arbitration, applicable law, number of arbitrators, rights of the competent court regarding the arbitration, are regulated by the law, thus, the parties should carefully consider terms of an arbitration agreement in case they intend to resolve the dispute differently.

Interim measures can be granted by an arbitration institution (before formation of the tribunal), by the tribunal itself, or a competent Russian court (law 382-FZ, arts 9, 17).

Legal expenses are paid by the losing party proportional to the amount of the claim granted by the tribunal, unless the parties specifically agreed otherwise (law 382-FZ, art 22].

An arbitral institution is liable only for damages caused by intentional or grossly negligent breach of its responsibilities and is not liable for an arbitrator’s actions—unless the rules of institution stipulate greater liabil- ity (law 382-FZ, art 50).

An arbitrator is immune from civil liability and can be liable only within a civil claim in a criminal case. However, the rules of an institution can provide the possibility of reducing the arbitrator’s fees in cases of damages caused by actions of the arbitrator (law 382-FZ, art 51).

Challenge of an arbitration award

An arbitration award can be challenged by the parties, by the third parties affected by the award and by prosecutors in defence of rights of Russia and the rights of municipal bodies, in cases where they were not party to the dispute (law 409-FZ).

In conclusion, the new arbitration laws intend to make the arbitration process in Russia more transparent, modern, effective and reliable. Hopefully, we will see measurable results and changes in the near future.

The views expressed by our Legal Analysis interviewees are not necessarily those of the proprietor.