Anna Grishchenkova spoke at the conference “Arbitration in spotlight: enforcement of arbitral awards and interaction with state courts after the arbitration reform” 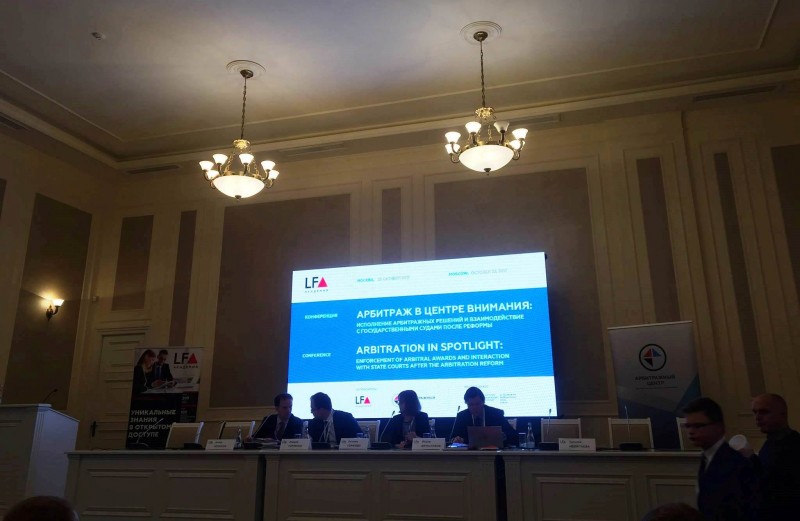 On 23 October, 2017 the conference “Arbitration in spotlight: enforcement of arbitral awards and interaction with state courts after the arbitration reform” took place in Moscow. The conference was organized by the innovative education project “LF Academy” and Arbitration Center at the Institute of Modern Arbitration with the support of St. Petersburg International Legal Forum.

According to the new Russian arbitration law, after 1 November 2017, only those arbitral institutions that have obtained a governmental authorization and complied with the new strict requirements will be able to administer arbitration. In this regard, one of the crucial tasks for arbitral institutions upon the expiration of the transitional period will be to gain credibility and respect not only from business, but also from state courts. During the first session participants have discussed which steps are necessary to be taken for this and also have examined whether the reform helped to improve the quality of administration of the arbitration and the authority of arbitral institutions.

The arbitration reform has also significantly modified the framework for interaction between state courts and arbitration. During the second session, judicial assistance and supervision in arbitration in practice of the Russian and foreign state courts was also discussed.

Anna Grishchenkova, Litigation and International Commercial Arbitration Partner of KIAP, spoke at the third session “How to counter abusive and dilatory technics while enforcing an arbitral award?”. In the speech Anna gave practical recommendations for successful enforcement of arbitral awards.

Managing Advisor of the HKIAC Joe Liu in the mini-session has discussed with participants the practical aspects of arbitration in Hong Kong from the position of the HKIAC.

The Conference was attended by the representatives of the leading Russian and foreign Arbitral institutions, as well as by outstanding experts in the field of arbitration, practicing in various jurisdictions.

KIAP International Commercial Arbitration practice represents clients’ interests in international commercial arbitration in Russia and abroad, as well as before Russian courts in matters involving recognition and enforcement of international commercial arbitration awards, provides consultations on arbitration agreements, its validity and enforceability, on facilitation of out-of-court settlements and on strategies for international commercial arbitration. The practice is recommended by the international rating Legal 500 EMEA, Russian rankings Pravo.ru-300, Kommersant and Pravo-300 "Sympathy rating". The practice is led by Anna Grishchenkova, partner, LL.M., MCIArb. In 2020 Anna was appointed as Regional Representative of the Russian Federation in the IBA Litigation Committee for the second time, and during 2018-2020 she was a Co-Chair of the Young Litigation Lawyers Forum of IBA. In 2019 Anna was appointed Deputy Chairman of the ICC Russia Commission on Arbitration. Anna is also a Regional Ambassador at HK45 - Hong Kong International Arbitration Centre’s committee (HKIAC). Included into panel of arbitrators in Hong Kong (HKIAC) and into list of arbitrators in Austria (VIAC), Kuala Lumpur (AIAC), Korea (KCAB INTERNATIONAL) and Russia (the Board Member of the Russian Arbitration Center). Author of the book “Psychology and persuasion skills in dispute resolution”.