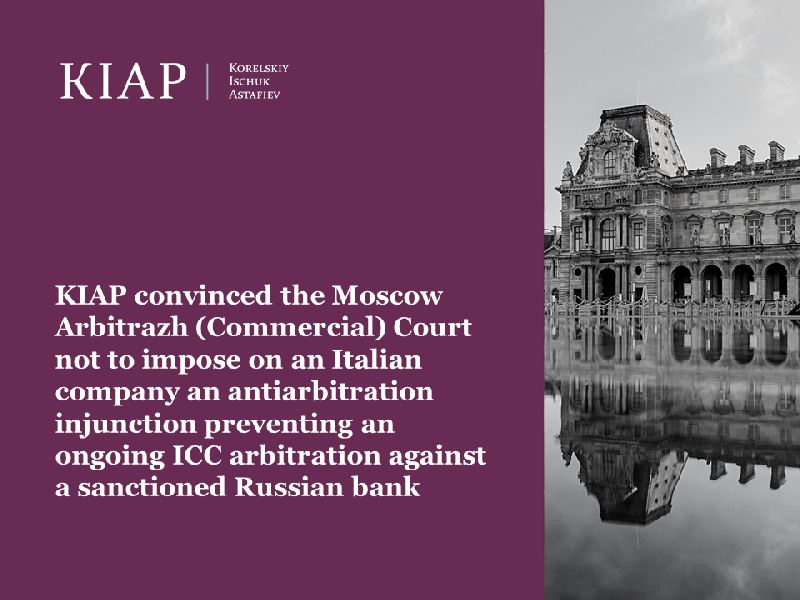 KIAP is currently representing a foreign construction company in an ICC arbitration seated outside Russia. Following the initial respondent’s reorganization, the arbitration is being pursued against a Russian bank which is a 99,9% subsidiary of one of the largest state-owned Russian banks. Both banks are subject to US, UK, and EU sanctions.

Subsequent to the events of February 2022, new sanctions were adopted against the respondent to the arbitration, including those cutting access to SWIFT. Furthermore, a ‘magic circle’ law firm suspended its engagement to represent the sanctioned bank in the ICC arbitration. Relying on these facts, the Russian bank applied to the Moscow Arbitrazh (Commercial) Court with an application for an antiarbitration injunction preventing the company represented by KIAP to continue pursuing the ICC arbitration (Art. 248.2 of the Russian APC).

KIAP managed to show the Moscow Arbitrazh (Commercial) Court that in the cited case any restrictions of the bank’s access to justice in the ICC were absent and that the Russian bank abused its procedural rights.

The Court’s ruling is the first case when a Russian court interpreted the rule adopted by the Commercial Chamber of the Russian Supreme Court in the widely applied Uralvagonzavod case in the sense that it goes far beyond the mere automatic application of the Articles 248.1-248.2 of the Russian APC due to the introduction of sanctions against a Russian party. As the Judge M.V. Larin stated, the party opposing to the injunction should not be prevented from demonstrating the court the absence of actual restrictions of the applicant’s right of access to justice, as well as that the international arbitration is fair and impartial.

The Italian company in the case was represented by Stepan Sultanov (the Head of Projects of the KIAP’s International Arbitration Practice), Ilya Dedkovskiy (the Head of the KIAP’s Bankruptcy practice), Alexander Kartashov (Associate), Anastasiya Ryabova (Junior Associate), as well as Anna Grishchenkova (Partner).